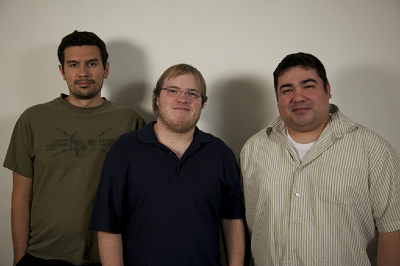 Monty Goulet, an audio engineer with years of experience in the music and gaming industry, founded Maestro Interactive Games with the idea that audio should play an essential role in the evolution of mobile gaming. After attending E3 and GDC this past year, he came to the realization that the gaming industry is currently too focused on graphics and special effects with little emphasis on originality and comprehensive audio design. Hence, Maestro Interactive Games was formed.

I interviewed Monty Goulet to find out more about Maestro and how it came about. “So many titles are focused on the graphics, but no one remembers [graphics] as well as they remember the audio within the games.” He said, “If you hum the Mario theme, everyone knows it.” You can blame me later when it’s stuck in your head all day.

This philosophy about great sound is the foundation of Maestro. The core team of game designers also includes: Chris Cantu, an experienced artist with a background in video and 3D animation specialist Christopher Trevino.

Within months of founding the company Maestro released three casual gaming titles, with a fourth (significantly larger) game on the way. Goulet mentioned that the initial releases were used as a team building exercise in order to get the core team used to one another’s methods and gain momentum going into a larger project. The upcoming fourth game is titled Into Darkness, an audio-driven adventure game played in first person.

Starting a Business in Austin

As with any new business, a number of challenges await any startup attempting to enter a saturated market. Mobile gaming is big business and Goulet hopes Maestro Interactive Games will grab a piece of the pie.

Goulet explained some of the early decisions intended to make the transition easier this way, “We have the privilege of being part of Tech Ranch Austin, an incubator focusing on technology and community.”

Business incubators are abundant in Austin. They are essentially a safe haven for entrepreneurs attempting to build a new business from scratch. Tech Ranch Austin provides these startups with co-working space, meeting rooms, and classes to help you launch and build your business. For a company on a budget, these environments provide a physical space to coordinate teamwork and collaborate with other startups. Goulet added, “Communities are everything in the game industry.”

“Maestro Interactive Games is dedicated to providing unique, compelling, creative audio driven titles that tell a story. Audio, George Lucas said, was 50% of the movie-going experience.” Goulet continued, “I believe the same to be true for video games.”

Monty Goulet also hired a writer, Stephanie Vastine, to help develop the story and create a more immersive experience for the player. In the mobile gaming market, a lot of independent studios elect to go without a writer in order to cut costs and concentrate more efforts on building a game with aesthetic appeal. The hope for Maestro Interactive Games is that by concentrating on storytelling, while appealing to more of the player’s senses, the company will develop games people enjoy and tell their friends about.

The startup also runs on a philosophy that every member of the team is allowed their own creative influence over the products. “No one at Maestro Interactive Games is to be denied the creative freedom to pass an idea around. Control like that is one of the reasons I believe that some studios have failed in the past.”

Building a Development Community in Austin

Goulet closed out the interview by mentioning an initiative going on at Maestro Interactive Games that could have a lasting impact on the independent developer community within Austin. “While we are a game company at heart, and that is our primary focus, we also know that video games and the game industry is a community. We plan to give back to that community.” He continued, “We are currently in the process of designing a Game Jam and Incubator that we think the industry in Austin needs now more than ever. With so many people just starting out in the industry and many of them going the indie route, we believe that something like this is needed.”

He reflected on how, as kids, many game developers would sit around with their friends and talk about their favorite games. This still goes on today while they work on their own titles. By breaking through the traditional barriers competition creates, Goulet believes independent game developers can band together to create better (and more profitable) titles for their respective customers.

Alien Drop, Alien Revenge, and Alien Labyrinth are all currently available in the App Store, with Android versions coming soon.

0 comments on “Maestro Interactive Games Focuses on Audio and Community”